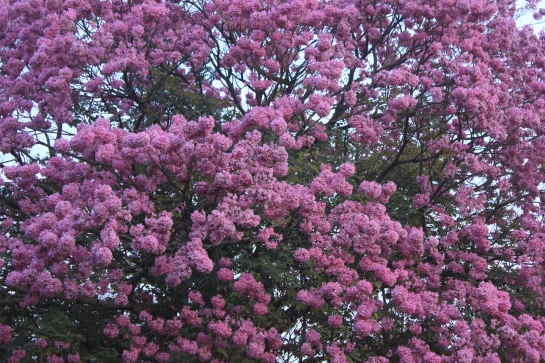 Blooming time is the most romantic time in the Garden City. There are quite a few blooming times in the year, my favourite being late February/early March when the Tabebuia argentea or the Tree of Gold is in full bloom. Just being in the midst of these yellow canopies makes you feel intoxicated with the feeling of being in heaven. It gives you a heady feeling of divinity unparalleled to anything else. Not far behind the Tabebuia argentea blooms are the purplish-pink blooms of the Tabebuia impetiginosa and the light pink blooms of the Tabebuia rosea. Clusters of flowering trees add to the joyful experience.

Despite being a tad busy this November, I managed to squeeze in time for a visit to Cubbon Park where there are a lot of Tabebuia impetiginosa trees. It was on a Sunday. I actually wanted to head there in the morning but overslept and had to postpone my trip to the evening hours. Things were moving at such a slow pace that I almost missed going in the evening too. Luckily, I got a bus in the nick of time and reached the Corporation Side Gate of Cubbon Park at around a quarter past 5. It was a Sunday evening and needless to say, the park was crowded with a lot of couples, families, groups of young men and women and the regular Cubbon Park walkers and joggers. There were a lot of cyclists too zigzagging through the crowd. Amidst all the brouhaha, it felt nice to hear the caws of crows and chirps of so many other birds.

I weaved through the sea of humanity. Strangely, the Aswath Katte near the Corporation Gate entrance wore a deserted look with only one man on a seat lost in thoughts. I still have not been able to lay my hands on the history of this katte. 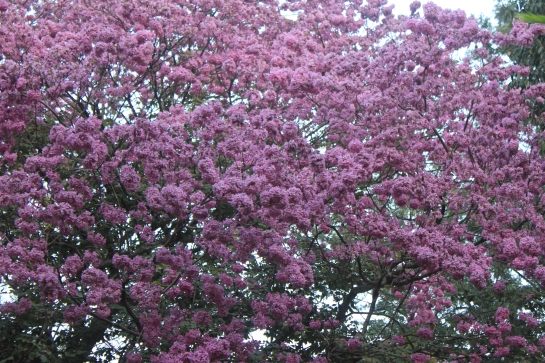 As I walked on, I spotted the first beauty and lost no time in taking a picture of her canopy. I was happy the blooms were still there. The flowers were still young. Once these trees bloom it is not long before the flowers fall off. The reasons are many. Many get vandalised and then there are many which fall off due to natural factors like wind and ageing. 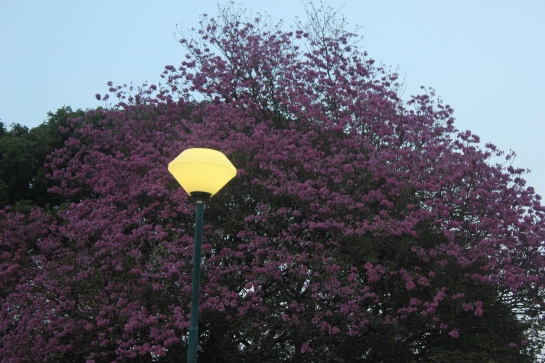 Despite Sunday being a no-traffic day at Cubbon Park, the traffic lights were on. The evening was wearing on, the street lights were on. I had to hurry up with my pictures before dusk enveloped the place. I had to make the best of the short time I had. In a way, it was a blessing in disguise to be late because the blooms look even more beautiful with a fully-lit street light in the foreground.

A few steps later, I reached the heavenly spot where you can find the majority of Tabebuia impetiginosas. 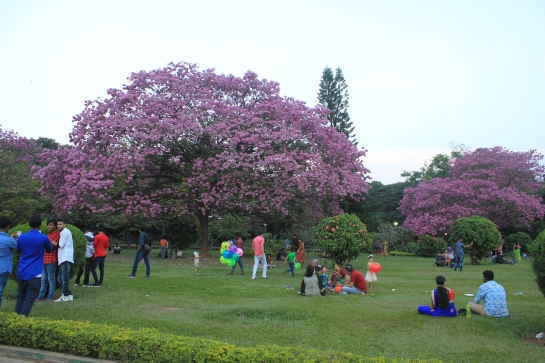 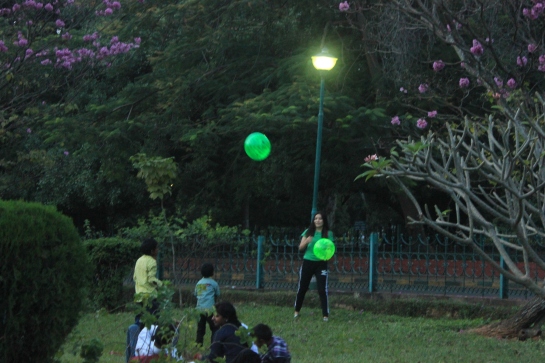 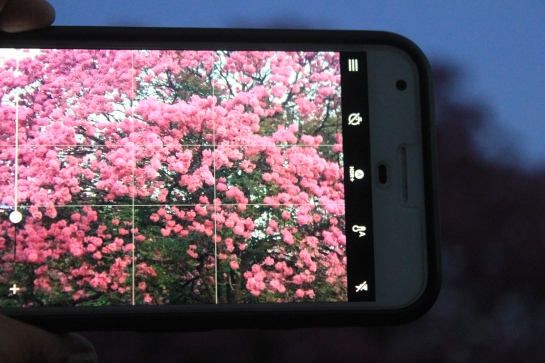 People were having a whale of a time under the pink canopies. Many were picnicking, children were playing, and a lot of people were trying out different selfie poses. Balloon and peanut sellers were making brisk business. And I went into a clicking frenzy. I tried to work some magic with my mobile too but it did not work out. The light was low.
It wasn’t long before I decided to call it quits and march out. It felt nice that I got to spend one hour amidst the splendid purplish-pink blooms.

As I walked on out of the MG Road gate of the park, I could not resist taking a picture of the magnificent St Mark’s Cathedral.